I’m Carlos’s older brother. I know what you’re thinking, “You love your family, so of course you’d love your brother’s gym!” Well, as the second oldest of four kids, there’s no way I was going to let my little bro school me on how to get fit. You see, I’m not just the relative of this fitness fanatic; I’m also a professional hockey player as well.

After leaving the University of Michigan in 2004, I was first round 6th overall in the NHL draft. Since then, hockey has taken me anywhere and everywhere. From representing team USA at the IIHF World Championships in Switzerland and Slovakia to a couple of years with the Winnipeg Jets, I’ve been able to the play some pretty amazing games. Today, I’m back in the states but while I’m local in the off-season, I’ll be playing for Florida.

It might sound odd that a Cuban American is so in love with hockey (in fact, I’m the first Cuban American to play in the NHL), but like many Chicagoans, I started on the ice pretty young. Like the rest of my family I love staying active and just like my little brother, it became my career. Still, even after Carlos opened up CrossFit Impact, between the geographical distance and sibling dynamics, I had never taken him up on training until now. 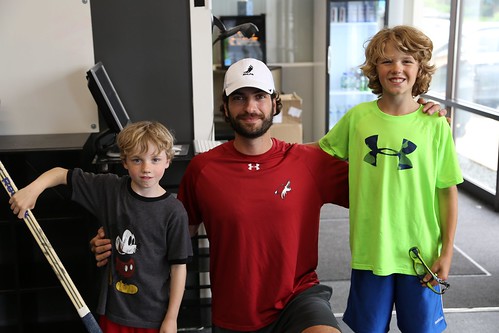 To put things in perspective, our 91-year-old grandmother comes to Carlos—I should have followed her example earlier! Being a professional athlete is not easy and it requires a lot of perseverance and dedication. For years, I just followed the advice of my trainers but it never quite felt like it was enough. This  year, as Carlos likes to say, “I finally saw the light” and gave my little brother’s gym a try! I’m so glad I did and I can honestly say that I feel better now than I ever have. I may have resisted at first, but now I’m so excited to be working with Carlos. With my family by my side, I can’t wait for this season to begin!